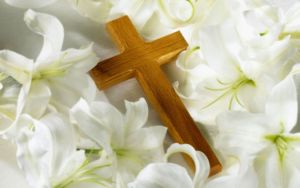 Rose Buschynski Warner, 92, of Edgewater, Florida, died Feb. 3, 2021, at home after a brief illness.  She grew up in Schoharie County, New York, and was the valedictorian of Middleburgh High School. After a year of secretarial school in Rhode Island, she married her high-school sweetheart, Charles Jacob Warner.  They were married for 69 years before his death in 2015.

Her husband was a pastor in the Troy (NY) Conference of the United Methodist Church, where he served churches in Speculator, Albany, Troy, and Hudson Falls with Rose at his side, always living in church-owned parsonages.  Rose’s great dream was to own their own home, and when they retired in 1990, they had their dream house built in Edgewater. Thanks to the professional care of VITAS Healthcare/Hospice, she was granted her often-expressed wish to remain there until she died, surrounded by the agency’s loving staff and friends.

Rose was a homemaker, wife, and mother. For years she taught children’s Bible school and adult Sunday school and played an active role in the Women’s Society of Christian Service (WSCS), later United Methodist Women (UMW).

She also had a long career outside her home.  In Troy, Rose worked as the secretary for Pawling Avenue United Methodist Church and then for the chair of the biology department of the local community college.  In Hudson Falls she was an administrative assistant and later office manager for government departments in Washington County, where she became a successful grant writer.  She was commended by all as an invaluable worker.

Rose had three children, Cindy (Mike Matala), Schaghticoke, NY (deceased); Nancy (Bonnie Kelley), Laurinburg, NC; and Mark Warner (Kelly), Ballston Spa, NY.  She outlived her brothers and their wives, Windy (Marion) and Joe (Elva) but is survived by her older sister, Helen Wardwell of Edgewater.  She had seven grandchildren, Hayley, Jamie, Kerri, Tony, Hannah, Jonathan, and Katie and three great-grandchildren, Tierney, Sophia, and Olivia, as well as a niece, nephews, and their families.

Memorial gifts can be made to Hudson Falls United Methodist Church, Hudson Falls, NY. A memorial service will be conducted locally at a later date and inurnment will take place in Middleburgh Cemetery. Coltrain Funeral Home, LLC of Middleburgh is honored to be caring for the family locally.

To send flowers to the family or plant a tree in memory of Rose Warner, please visit our floral store.

You can still show your support by sending flowers directly to the family, or by planting a memorial tree in the memory of Rose Warner
Share a memory
© 2021 Coltrain Funeral Home, LLC. All Rights Reserved. Funeral Home website by CFS & TA | Terms of Use | Privacy Policy