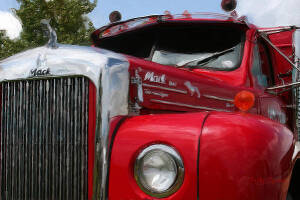 Robert “Burl” E Benninger, our beloved truck driver, drove off in a B-61 Mack to that big highway in the sky on Thursday, August 4, 2022.

Burl was born to Andrew and Elizabeth (Juchler) Benninger on July 27, 1934, in a big red brick house on Schoharie-Gallupville Road.  He attended Schoharie Central School, just six months shy of his graduation, he left to go into business with his father.  Driving truck was his passion and he spent many happy years alongside him.  In 1966 when his father Andrew retired, the business became known as R.E. Benninger Trucking, until his successful first retirement in the early 90’s.  Retirement from Benninger Trucking didn’t last long, he went on to haul lumber, wood chips and concrete blocks, finally going to work at High Cliff Thoroughbred Horse Farm, watering horses and taking care of errands.

Burl married Ethel Holt on October 8, 1955, almost 67 years ago.  Together they lived on the Benninger family property in Central Bridge, NY for 56 years.  They raised their three children Bobby, Katie and Rich who all live locally.  On Burl’s 60th birthday, a big party was held in a large barn on their property, which started what today is known as “The Olde Tater Barn”.  Burl and Ethel rented and operated the facility for weddings and other events for 16 years.  In 2010, the “OTB” was turned over to their son, Rich, and daughter, Katie, the second family business to be passed down on the property.  His six granddaughters were all married on the property.

He is also survived by his 6 grandchildren Meagan (Uzay) Tumer, Whitney (Andy) Pinkerton, Brittany (Andrew) Tambasco, Erika (Donald) Barron, Greta Benninger and Marlena (Ross) Ryerson, had the privilege of meeting his 8 great grandchildren - Jaxson, Ellarie, Maggie, Zoey, Blake, Mia, Scarlett and Teddy.   His family will miss him dearly and are relieved to know he’s been reunited with his family and doggies in heaven.

He was able to celebrate his 88th birthday surrounded by those that loved him.  Special thanks to the earthly angels, Diana, Ellen, Joan and Mary who cared for him in the last 2 months.

Coltrain Funeral Home, LLC, of Middleburgh is honored to be caring for Burl and his family.

To send flowers to the family or plant a tree in memory of Robert E. Benninger, please visit our floral store.

A Memorial Tree was planted for Robert

We are deeply sorry for your loss - the staff at Coltrain Funeral Home, LCC

Join in honoring their life - plant a memorial tree