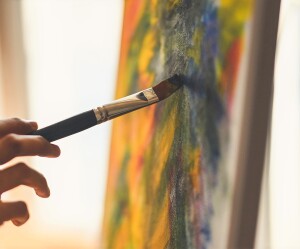 Writing about one’s life is very much like brush strokes on canvas.  Details, colors, memories, thoughts, and revisions, until a picture emerges.  A picture of something beautiful that captures and speaks to the mind and the heart.

Michael Morkaut’s life came full-circle on Friday, March 4, 2022, when just days after he made his final brush strokes on his last painting, he found eternal peace in the comfort and warmth of his home, surrounded by the most beautiful things he created, his family.

Michael lived for his family and his friends.  He was a devoted husband, a loving father, and a loyal friend.  Michael never met a stranger and his friendship and kindness touched countless people throughout his 74 years.  These relationships filled him and recharged his spirit as much as his love of warm weather and sunshine.  His favorite playlists were the soundtrack of his life as he captured a scene on canvas or tended to his property.  Michael treasured nature and being outdoors.  He enjoyed a good hunt yet respected and honored animals and their place in this world.   In addition to the people who surrounded him, he enjoyed many hobbies such as skiing, travel, writing, storytelling, woodworking, and live music.

It is fair to say that Michael’s passions and love of life simply wore out his earthly vessel, and all of these and much more will be forever close to the hearts of his wife: Susan (Stryker) Morkaut of Gilboa; his daughters and their spouses: Ann Morkaut and Jayson Buzzard, of Charlotte, NC, Elisabeth and Darin Van Houten of Pearl River, NY; his son: Christopher Morkaut of Berlin, Germany; and a lifetime of friends and extended family members.

Family and friends are invited to celebrate Michael’s love, strength and courage by memorializing him on Friday, March 18, 2022 at 1:00pm, at Rockland Cider Works – Upstate, 193 Stryker Road, Gilboa, NY 12076

Coltrain Funeral Home, LLC, of Middleburgh is honored to be caring for Michael and his family.

To send flowers to the family or plant a tree in memory of Michael, please visit our floral store.