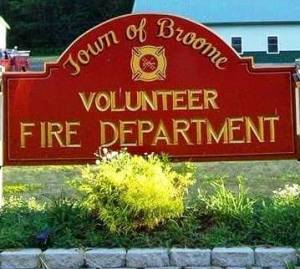 Livingstonville – Gerard “Jerry” G. Fitzpatrick, 88, of Stone Store Road, found eternal peace on Thursday, October 31, 2019, in the comfort of his home, surrounded by his loving family.

Jerry was born on July 16, 1931 in Queens Village to Frances (Steiner) and Hugh Fitzpatrick.

He was drafted in to the United states Army in 1952 and obtained the rank of Sergeant First Class Artillery before his honorable discharge in 1953.

Jerry worked for NY Telephone as a line splicer, advancing to be an engineer by the time he retired. Active in retirement, he was a communicant of Our Lady of the Valley Catholic church, and a  member of the Town of Broome Volunteer Fire Department and volunteered at their barbeques and calling the numbers for BINGO.

He loved gardening around his home, being in nature and feeding the wildlife.  Jerry was a true handyman, do-it-yourselfer and the original “Mr. Nice Guy,” which he proudly displayed in pinstriping on his truck.  He also loved feeling the wind in his face and the rumble of the engines of many motorcycles over the years, including Harley Davidsons, Indian, BMW and Hondas.

Jerry’s love and memory will be held forever by his High School sweetheart, Pauline (Muskewitz) Fitzpatrick of Livingstonville, whom he married on January 16, 1954 and their children: Diane (Tim) Nodell of North Massapequa, Karen (Mike) Budney of Smithtown, Gerard (JoAnn) Fitzpatrick, Jr. of Riverview, FL, Keith (Cindy) Fitzpatrick of Westbury; his grandchildren: Christopher Fitzpatrick, Sean (Cathy) Fitzpatrick, Kyle Budney, Ryan Budney, Madison Budney; his great-grandchildren: Kelsea, Nora, Declan and Tobin Fitzpatrick, all of whom he got to see before he passed.

A Mass of Christian Burial will be celebrated at 11:30AM on Wednesday, November 6, 2019 at Our Lady of the Valley, Main St. Middleburgh with Military Honors at church then cremation and private interment.  All are invited to visit with Jerry’s family from 6PM-8PM on Tuesday, November 5, 2019 at Coltrain Funeral Home, LLC, 134 River Street, Middleburgh.

To send flowers to the family or plant a tree in memory of Gerard "Jerry" G. Fitzpatrick, Sr., please visit our floral store.